I have been lucky enough to foster the worlds most adorable puppies for the next couple of weeks while they grow healthy, strong and old enough to be desexed. While their cuteness is beyond even Ryan Gossling cute, their charm quickly fades when they leave their droppings and little puddles throughout the house and on your favourite rug. GRRRRR.

My little darlings are six week old Chihuahua’s.. They were born at the Animal Welfare League Qld after their mother arrived as a stray. It was an unexpected birth and very quick and before we knew it Pirana, Sasha Fierce and their two brothers were born. (Yes I know they have crazy names but they are names I have given them so as not to become to attached –  and by the way it isn’t working).

Hans is obsessed by these little critters and lays down while they jump and play around him.

So back to toilet training…. here are some tips to save your floors, feet and furniture from puppy poopies.

Toilet training should start as soon as your puppy gets home. Puppies urinate frequently and success in housetraining depends on anticipating their needs – they should be given the opportunity to relieve themselves at least every two hours. You can usually tell when a puppy ‘wants to go’ because he or she will look around anxiously, walk in circles and start sniffing in suitable corners looking for a place. That’s your cue to whisk your pet outside.

Whatever the weather, puppies should be taken outside after they have woken up, or had something to drink or eat. Once out of the house, say a command such as ‘Go Now’ so they know it’s OK to relieve themselves. Praise them when they go, but ignore them when they fail. And if you do find a puddle inside, don’t tell your pup off unless you catch him or her in the act; otherwise your pet will have no idea why they’re being punished. 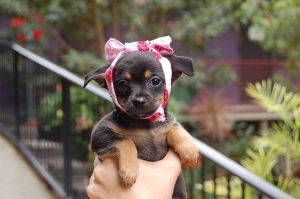 A puppy should be taken outside after the following:

Never, ever ‘rub their nose in it’.
Old-fashioned responses such as ‘rubbing the dog’s nose in it’ or administering any form of punishment will not teach the dog anything, in fact it may actually delay the learning process. The dog may instead learn that toileting in front of the owner is inappropriate and this then makes rewarding toileting (when they do go in the right spot) difficult.

DID YOU KNOW PUPPIES CAN PEE UP TO 12 TIMES A DAY! EEEK

You can paper-train small breeds and young puppies on newspapers or ‘wee pads’. Praise them with lots of affection when the newspaper is used and ignore them when it’s not. Be careful not to get in the habit of praising with food treats, because you run the risk of overfeeding. Over time, move the newspapers towards the door and then out into the garden. Take a small piece of soiled paper outside, as the puppy recognises its own unique scent and will want to reinforce it.

Teaching your puppy to wait

An alternative method to paper training is crate (puppy playpen) training, where puppies are taught to wait in their own, special space before they’re taken outside. The key is to give them an opportunity to relieve themselves at least every two hours, especially after eating, sleeping or playing.

It’s important not to be angry when accidents happen indoors – you have a puppy, it’s bound to happen.  Just be sure to clean the area thoroughly to avoid the having the puppy return to the same spot next time.

When it comes to adult dogs, start by keeping them confined to a designated space. Make a point of taking your dog outside on a regular basis, and when he or she ‘goes’, offer lots of hugs and praise. Same as for puppies, if there is an indoor accident, neutralise the area to prevent them going there again. 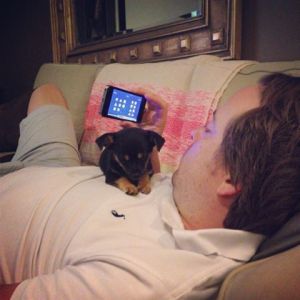